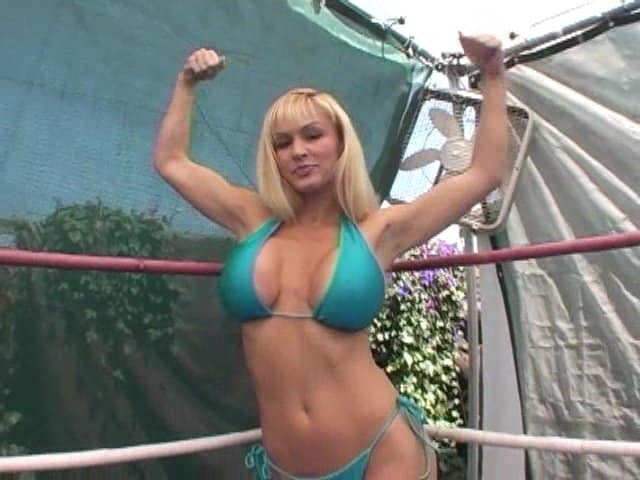 Prepare Yourself For Something EXTREMELY Rare!

THE DESCRIPTION OF THIS MATCH IS WRITTEN BY TANYA HERSELF!

Liz embodied the modern ideal of a lithe, trained fighter whose beauty provided a pleasant counterpoint to her fierce athleticism.

Tanya looked like a stripper who had taken a wrong turn and ended up in a wrestling ring.

Sometimes, however, appearances can be deceiving.

In front of a roaring crowd – and amidst a great deal of confusion about the actual rules of the match – Liz and Tanya wrestled for supremacy.

For months afterward each woman listened to a great deal of commentary from people who had either witnessed the event or simply just heard about it.

Many of these individuals suggested a rematch.

Both Tanya and Liz expressed willingness but the opportunity never arose.

Liz continued to hone her skills and perfect her chiseled physique.

Tanya did sporadic workouts and drank herself into oblivion.

She remained at this low ebb for a number of years until finally, in mid-2010, she decided to stop being a blackout, falling-down drunk.

By late 2010 she had reclaimed her self-respect.

In March 2010 Tanya received a mass e-mail from Liz who was seeking other wrestlers with whom she could shoot website content. Tanya asked her if she would like to finally film the long-awaited rematch that so many fans had requested.

On May 24, 2011 the two women met at the Los Angeles-area ring of STJ Productions.