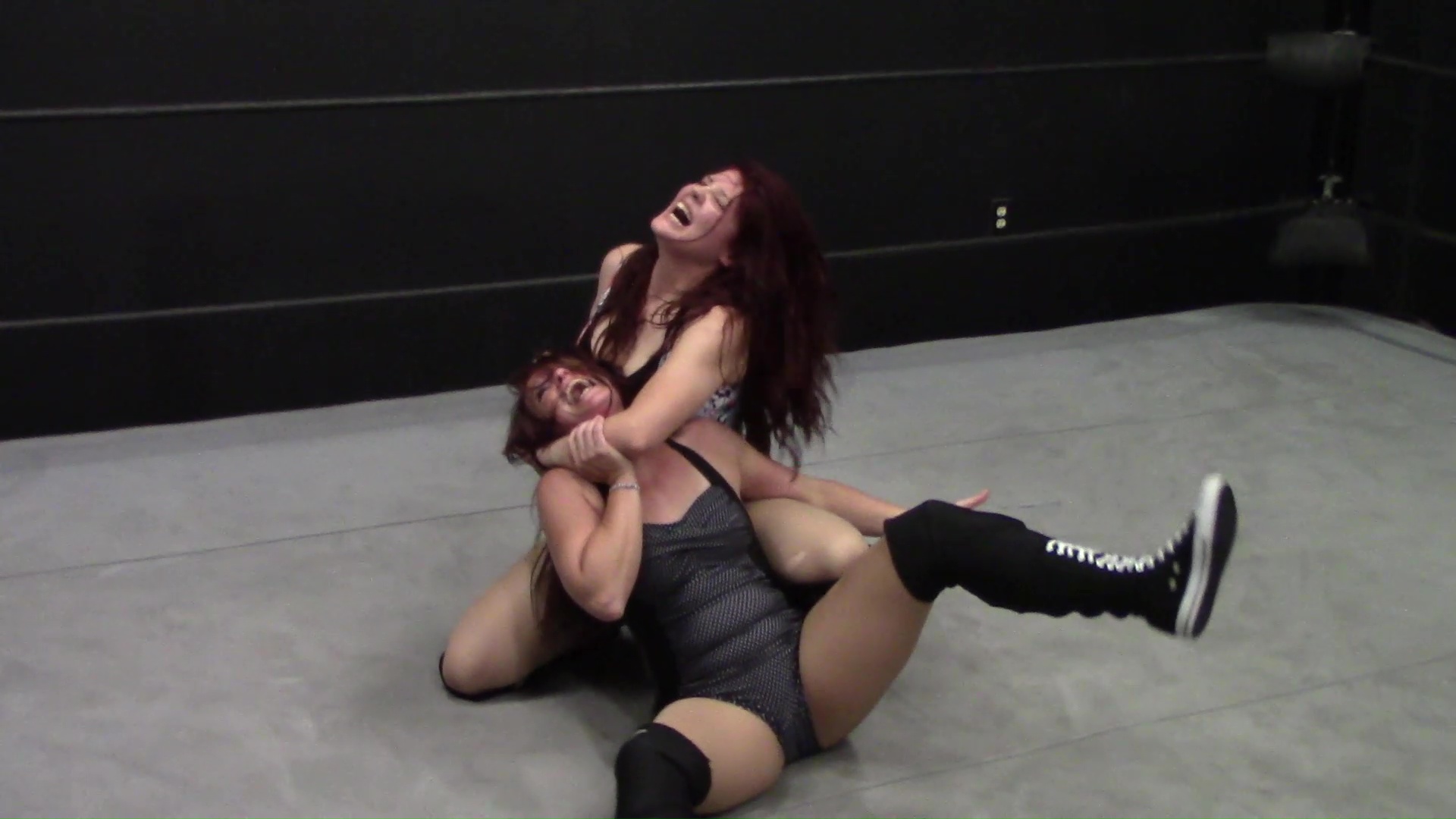 Diana Taylor takes it upon herself to show newbie Betty Battles the ropes in a very physical way, with much hairpulling done, and finishing with a brutal KO, in “Betty’s Hairpulling Initiation”!

Betty is stretching in the ring as things begin, when Diana sneaks in under the ropes behind her. Betty greets her once she sees her and extends her hand out, but she finds Diana is not in any mood for pleasantries, receiving a kick to the gut!

This is followed up by Betty being grabbed roughly by the hair and thrown to the mat by it!

The rookie wrestler is brought back to her feet confused, her hair still being pulled, as she questions what is going on and why Diana is pulling at it. She is told in no uncertain terms this is an initiation, and gets a punch to her face for her troubles!

It’s back to the mat by her hair once more after that, and as Diana taunts her, Betty has her face rubbed and slammed into the mat viciously several times over! Betty is gonna have to survive a great deal to pass this test!

Her punishment is only beginning though, as now her head is used as a battering ram into all 4 corners of the ring one by one! This puts poor Betty on dream street, with the last head ram causing her to collapse to the mat. Diana attempts to pin her here, but Betty on what couldn’t be anything more than instinct, manages to kick out at 2.

As Diana looks down at her dazed foe, Betty makes a feeble attempt to fight back against her tormentor, using a punch to the stomach and a kick to the side. Neither strike really phases the experienced woman though, who picks Betty up by her hair again to her dismay, and delivers a pair of high knees to her stomach that are superseded by two punches to the small of her back.

She has still more to dish out too here, taking her face and slamming it into her knee twice, before finally letting her fall back to the mat. Once there, the hair is attacked again, this time with Diana laying on her back as if she was gonna camel clutch her but instead just tugs on it hard! Betty cannot stand the continued assaults on her red locks!

Upset, she tries again to mount some offense on Diana, punching her on the foot, and in the gut again when back on her feet, but it’s of no use. She quickly is tossed back to the mat again, and the beat down rolls on!

Diana applies a rear chinlock on her now, but Betty does manage to get out of this, pulling on Diana’s hair a bit herself to force a break.

All this does however is make Diana angrier, and she decides to really torture Betty for it, standing on her hair and bending her body upward by her arms! Betty SCREAMS in agony at this attack!

Incredibly though, even after suffering that, Betty STILL manages to kick out of the pin attempt that ensues when she is put down! She is a stubborn girl! Sadly it isn’t seemingly to do anything good for her however!

She does get back to her feet, using a couple elbows to Diana’s belly, and two punches to her feet to aid her, but like previously, Diana swiftly takes back control. She does so with a knee to the stomach, a poke to the eye that blinds Betty, and then as she stumbles around trying to see where her tormentor is, tosses her back on the canvas again by her hair, attacking her eyes again this time in the form of a rake, for good measure. Betty is pretty out of it!

She STILL has a bit in her tank amazingly enough, kicking up with her legs to shove Diana back into the corner when she nears her prone body on the mat. She takes a moment to gain a breather here, but it isn’t long before she’s being assailed again, Diana placing a brutal bodyscissor on her!

Betty tries to escape, but cannot, and to add insult to injury, her hair is under fire AGAIN! Diana shakes her like she was a ragdoll by it while still having the scissors locked on, and pulls on it with as much force as she can muster as well in addition. The cruel attack is enough to cause Betty to try harder to break free of Diana’s legs, elbowing her in the knees to finally do so.

Now the redhead is on the warpath, stomping at Diana’s back and chest, and grabbing at her hair again, making sure she knows what paybacks are like after all the hair misery she has endured to this point!

Her revenge is still short lived unfortunately, as Diana kicks her away in a similar manner to how she was kicked away by Betty just a little earlier, before she leaps on the fallen lady and strikes her repeatedly with punches and slams her head to the mat without any shred of mercy. She is furious that Betty refuses to stay down!

More violent hair pulling is done from there on her, and a brief choke is put on her when she has finished that defilement. Betty is struggling to breathe now! It’s not about putting her out though for Diana, so she lets’ her up.

Grabbing back on the hair as she has loved doing all match long, the corner is used as a weapon for a second time on the defenseless Betty, her head charged into it again. There is a twist to the corner onslaught this time though, as Betty is turned around so her back is to it, and finds her hair basically pulled THROUGH the top rope in an extremely nasty move! Once more the green wrestler is made to yell out in immense pain!

Finding something deep within her, Betty lashes out with a desperation kick to Diana’s stomach, but it only prolongs the inevitable a little longer. A couple punches to the face greet her when she staggers away from the corner, and then as she falls back to it, she is snapmared back onto the ring mat.

Betty’s chin is pulled back for a moment in a form of a choke at this point, but then Diana decides it is time to put an end to things! She picks up Betty and bodyslams her to mat, emitting one last yelp of distress from her, and pins her for the 3 count.

She’s not quite finished though yet! As Betty protests the postmatch aggression, Diana whips her into the ropes and delivers a very stiff clothesline as she comes off them, the force of which knocks Betty out completely! Now she’s done!

Diana stands over the motionless woman, proclaims she has passed the test, and walks off!