WARNING:   The website linked below may contain adult themes.   Proceed only if you are of a legal age to do so!

Click the image below to proceed to April Hunter 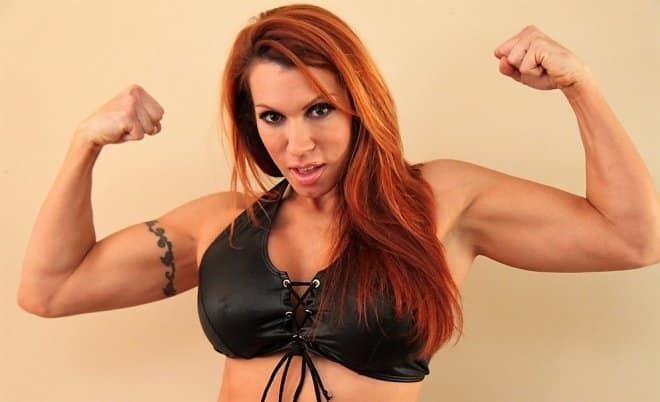 April Hunter is an American Professional Wrestler who debuted as a dancer in World Championship Wrestling – (WCW) – back in 1999.

After this, April trained with Killer Kowalski and it has been noted that she was the only female in the class.

After this time April worked for companies such as Action Wrestling Entertainment, Carmen Electra’s Naked Women’s Wrestling League – (NWWL) – and then became a tag team partner with Talia Madison as a team named T & A in Women’s Extreme Wrestling – (WEW).

April went on to make appearances at Total Nonstop Action Wrestling – (TNA) – she then toured with American Rampage Wrestling, worked for Shine Wrestling, and High Impact Wrestling Canada as well.

April also produced a lot of her own video content and appeared with companies on this website such as Cherry Bomb Wrestling, Ultimate Women’s Wrestling, and many other wrestling companies from all around the world.

As for her personal life, April was born of German, Scottish and Italian descent.

She hails from Philadelphia Pennsylvania and was a fast rising and well known fitness model before joining WCW.

April studied photography and creative writing and she has no issue at all issuing her voice and opinion on the politics of the day if you follow her on social media.

One thing you can say about April is that she goes her own way in life and does her own thing.

Here are some of her Championships and Accomplishments as listed on her Wikipedia page:

You can learn more about April at her personal blog entitled:  Putting the Clothes On, Taking the Gloves Off

Content involving April Hunter for sale at the Female Wrestling Channel listed below!