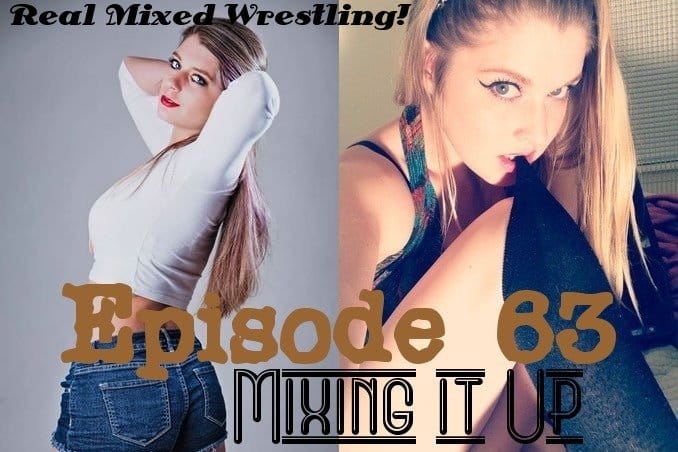 In Episode 62 we saw Johnny Ringo make some very rude comments to fans who are interested in Mixed Wrestling along with rude comments about him not wanting “snot nosed, garbage patch kids” watching our product.

Monroe Jamison disagrees with Johnny’s assessment completely and is beginning to believe he is losing his mind.

Not only does she want to offer mixed wrestling practices at the FWC, but she wants to show people out there (male and female) that our style of REAL wrestling is very tough, and very legitimate.

It is re-revealed in this episode that Hammer and Monroe were responsible for bringing Callisto Strike from California to further antagonize rising young star Scarlett Squeeze.

We don’t know yet.

Monroe opens the episode by convincing Callisto to travel to NYC with her to engage in mixed wrestling practices with FWC fans.  When the ladies return to Indiana, Callisto takes on her real life boyfriend in a best of 5 fall mixed wrestling matchup.

Monroe insists this will help Callisto get to the next level before Scarlett returns soon.

Privately, Monroe also wanted to get as much wrestling in as possible before her championship matchup against Carmella Ringo coming very soon.

How did the ladies do in NYC?

Was Callisto able to defeat her boyfriend in real action with her new found knowledge?