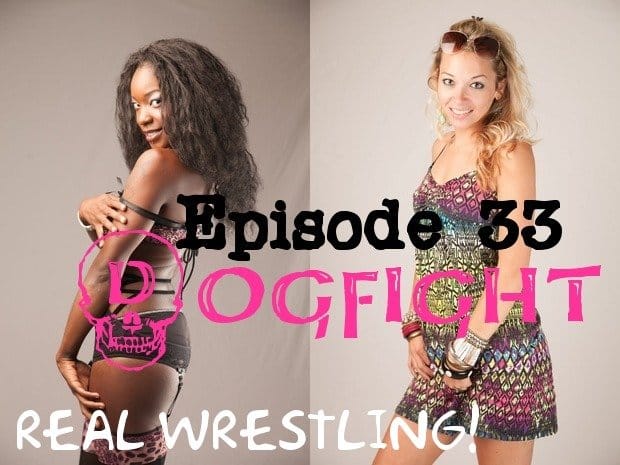 These Two Want To – ONE UP – The Other One Badly!

This episode starts with Johnny Ringo having to clean the entire house due to his loss on Episode 31 – Impromptu.

Thinking his girlfriend would be pleased, when she arrives, she is anything but.

Monroe is enraged that Foxy Rain barged into the house and beat her up on Episode 32 – Ambush.

Instead of filing a police report…

Monroe Jamison wants to make sure Foxy is punished on the mats.

Monroe dispatches Ashley Wildcat to get the job done.

Monroe is very confident that Ashley will succeed.

Ringo, not so much.

Foxy is absolutely loving the recent turn of events.

She is not only wanting to DEFEAT Ashley, but she wants to HUMILIATE Ashley so that she will never even think of facing her again.

Foxy suggests that the winner of this match………….gets to walk the loser of the match around the mat like a dog!

Most ladies would turn a request like that down, but Ashley Wildcat is a bad girl herself.

The thought of defeating the powerful Foxy Rain and then making her walk around like a dog………..she would relish that forever.

How in the world is this going to turn out?

Who is going to win this REAL wrestling match between Foxy and Ashley?